Edythe and the Model T

Edythe Kirchmaier recently turned 107 years old and, while discussing her car ownership history – dominated by Fords – with me, it came to light that her driving experience began in and with the first mass-produced car: the Model T. She learned to drive on one and had fond memories of it.

It was thus ideal when the oppor- tunity presented itself to arrange for Edythe to reunite with that car by con- tacting Roy Miller, owner of a 1915 Ford Model T. Upon hearing about 107-year-old Edythe and my desire to put her together with his vehicle, Roy graciously offered to give Edythe a ride. We arranged to surprise her at the Direct Relief offices during her usual Tuesday visit, with a big assist from Hannah Rael, who handles the charity’s media relations.

At first, I presented Ms. Kirchmaier with a tiny replica of the Model T that I’d recently assembled, which positively lit her up. She then described her uncle’s car, a hardtop with curtains around the cabin she had learned on.


The ultimate thrill, though, was her joy when we brought her out to her personal parking spot to see the real deal pulling up. The entire Direct Relief staff emerged from the office to see us help Edythe get into the car. Roy was thrilled, as this was his first opportunity to pilot the car with a passenger who was alive when it was constructed. The two of them talked about what it was like to drive during that era – Edythe revealed that she didn’t even need a license.

The Model T is not an easy vehicle to start. When it was time to set up, Roy hopped down to hand-crank the motor with a lever sprouting from the radiator grille, careful to adjust the spark timing in order to avoid the signature kickback that leads to tales of broken wrists.

We putt-putted out of the lot and down the lane, never reaching the T’s top speed of 45 mph, but Edythe was giddy the whole time, reflecting on cascading memories as we trundled along.

After Edythe exited the car, Roy offered to hand me the wheel. But first, he said, an in-depth lesson would be required; piloting a Model T is a different endeavor from driving a modern car. Yes, there’s a steering wheel, a handbrake, and three pedals arrayed on the floor at your feet. But this control setup is deceptive, since those pedals bear little relation to those of a present-day stick-shift.

That one on the right? That’s the brake. And where the brake should be, in the middle? Well that’s actually reverse gear. A clutch pedal on the left? No way; that’s the gear selector. So where the heck is the throttle? That’s actually the little lever mount- ed right behind the steering wheel. It points to 2 o’clock at idle and swings down to bring the revs up. There’s another lever on the left side of the wheel that controls the spark timing. 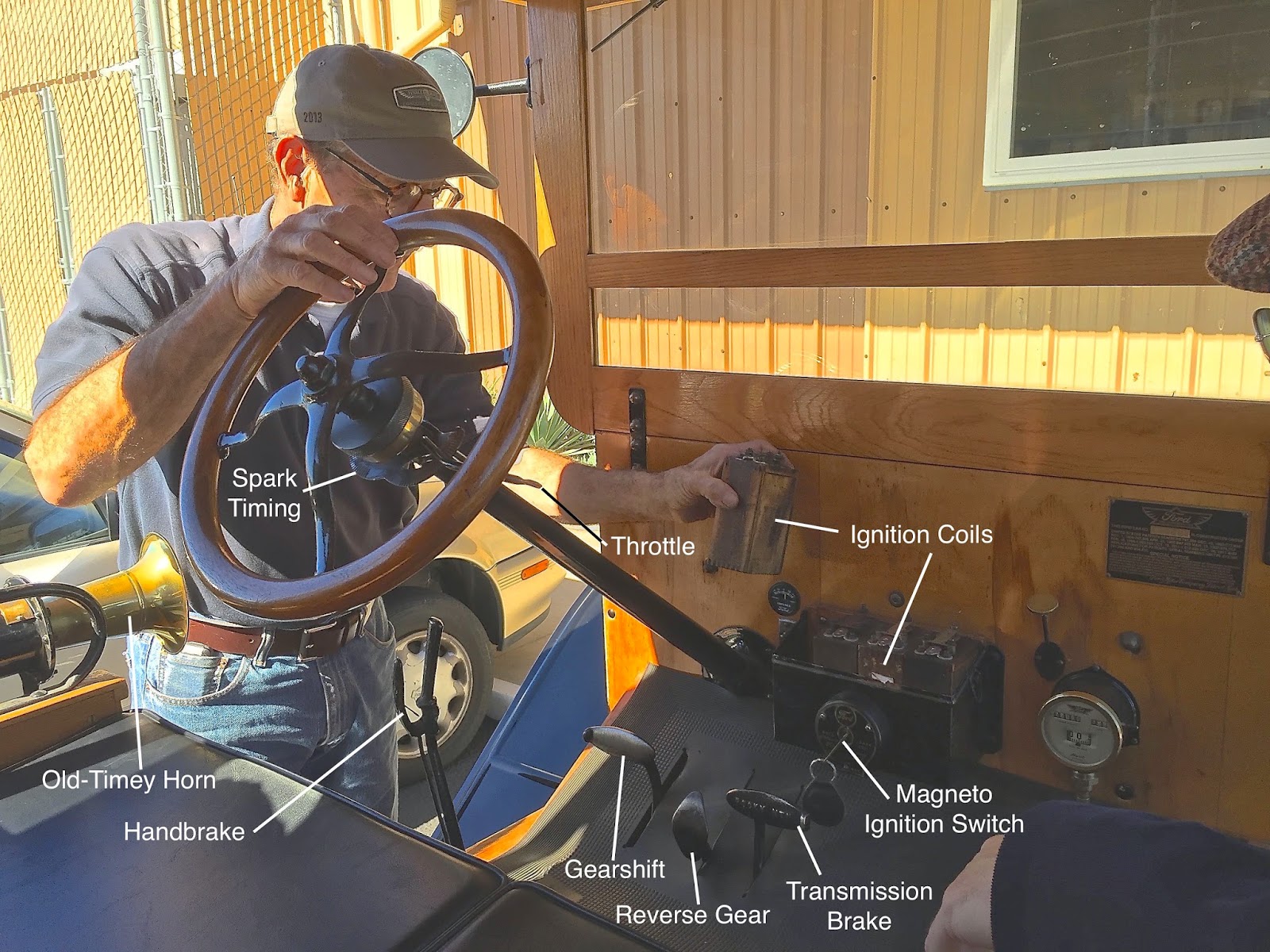 I eased down the throttle lever and leaned on the center pedal with my left foot, easing off the brake with my right, and the T puttered gently back- ward out of the spot. Next, I cranked the wheel the other way – clockwise does actually turn the car to the right! – and gently toed the left-most pedal to get the car into low gear. Keeping the car in that gear requires you to have your foot planted, but once we got to a more open space I was able to ease off, the pedal backing through neutral and into high gear.

At this point, I got to experience the T’s full-bore acceleration, all 20 horsepower worth, which would have been plenty for an era when there was no such thing as a highway on-ramp. We made our way back into the parking lot after a few laps, and I managed to ease it back into the space without much drama. In fact, the drive was surprisingly anxiety-free, and I took to the task more quickly than expected.

I’ll give most of the credit to my esteemed instructor, Roy, who arrived in Santa Barbara three decades ago, having spent time in Germany during his Army days, and Los Angeles and Las Vegas on many interesting ven- tures, including as a successful SCCA racing career. Lured here by a friend who owned a Lotus workshop, Roy bought his own auto shop in Santa Barbara shortly thereafter.

He bought the Model T some 15 years ago, and because the car wasn’t running at the time, so he got a great deal on it; he says it only took around 20 minutes of work for him to get it to crank. Restoring the vehicle was a labor of love that took several years to complete, particularly with Roy’s appreciation of the significance of the task. More than most old cars, preserving a Model T is akin to translating a manuscript of history.

It helped, too, that he’d been working on pre-war cars for more than a decade at his shop, East-West Motors. Aside from plenty of local events, perhaps Roy’s most high-profile gig is as a judge for the Pebble Beach Concours d’Elegance. With this association comes a network of some of the most knowledgeable car experts in the world. And he certainly tapped this network to help guide him in his restoration of the antique Ford.

The Model T isn’t just a car; it is a symbol of America’s industrial might, which helped to launch our nation’s trajectory as the most powerful force of the 20th century. While car people get riled up about a classic Corvette, everyone goes gaga over a Model T.

And it was for this reason that it was such a privilege to experience the car with the incomparable Edythe Kirchmaier. As humans, we’ve grown to treasure the links to our past, tracing the path of our evolution. It’s a thrill to be able to ask a woman like Edythe, “What was it like?” And it’s even more of a thrill to relive it with her.